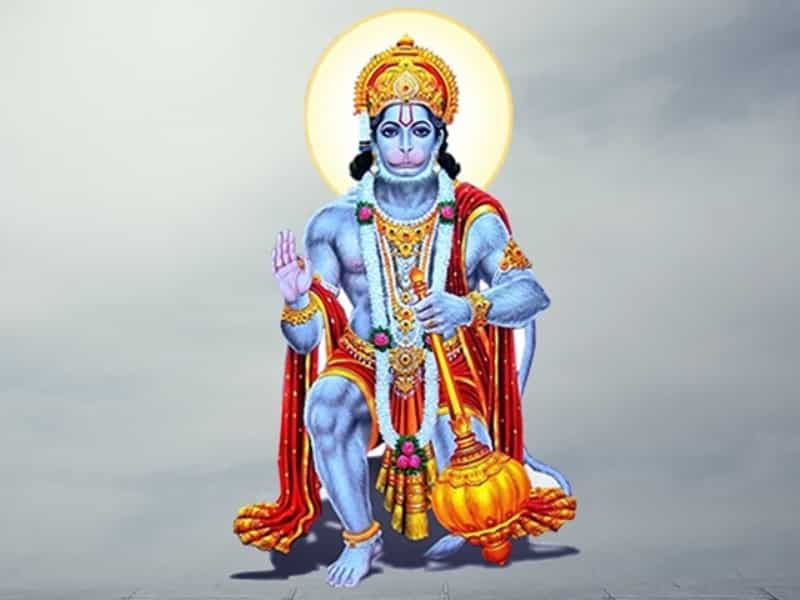 Who is Hanuman Ji?

Hanuman Ji (Lord Hanuman) is amongst the most honored god in the Hindu religion and views. HE is the greatest follower(Bhakt) of Lord Shri Ram. Lord Hanuman was born to father Kesari & mother Anjana. Kesari was a very courageous Vanara (A Monkey), and HIS mother Anjana was a renowned devotee of Lord Shiva.

Before Hanuman was born, together, Kesari and Anjana completed a hard Tapasya and praise to Lord Shiva for a son. Lord Shiva was so happy with their praises and oblations that HE bestowed the couple, a son who was later named ‘Hauman.’

This is why Lord Hanuman Ji is deemed as the incarnation of Lord Shiva (AKA Rudra) and also known as ‘Rudravatar’ (Avatar Of Rudra).

Hanuman Ji is the equivalent of ‘power,’ ‘love,’ ‘determination,’ Energy’ & ‘Strength.’ HE is the most powerful god in the Hindu religion. HE has a total of 108 titles, and some of them are very well obvious and told in day to day talk like:

In Sanskrit, ‘Hanu’ indicating ‘Jaw’ and ‘Man,’ meaning ‘Distorted.’ The cause why HE named Hanuman because once in his childhood, HE observed the SUN and misinterpreted it as a ripened yellow mango. HE was so fascinated that HE went all up in the sky to swallow the Sun. Lord Indra (King of all God) witnessed someone running towards the Sun so swift and confused the little boy Hanuman as some devil. This whole episode made Lord Indra so nervous that HE used his vajra (A Thunderbolt Weapon) on Hanuman Ji. The vajra punched so strong that it forced HIM (Lord Hanuman) on the ground and twisted HIS jaw permanently.

Sankat meaning difficulty, pain. Mochan indicating ‘Remover’/’Killer.’ So Sankat Mochan meaning the one who slays all the troubles and grief from HIS devotees’ life.

This name originates from ‘Vajra,’ meaning diamond, the most difficult which can’t be destroyed, ‘Ang’ meaning body, and ‘Bali’ meaning who has all the strength and vitality.

It is assumed and accepted that lord RAM asked Hanuman Ji to wait on the earth till a single devotee hymn and cherish lord RAM to defend the devotee from all the quandaries. So wherever ‘RAM’ is remembered, lord Hanuman will always be present there. Hanuman Ji is timeless and eternal and always stays on land to protect the devotees from all the predicaments.

What is Hanuman Chalisa?

Chalisa is praise given in simple style by the follower to command his God or Isht and to resolve his difficulties. It is called Chalisa because it has forty rows. Being recorded in uncomplicated language, it can be understood easily, so it became very prevalent in the people.

So the Chalisa written for god Hanuman is known as ‘Hanuman Chalisa‘.

Hanuman Chalisa was drafted by Tulsidas (Who was also the great follower of Lord Ram) in Awadhi which represents the characters and actions of Lord Rama’s big devotee Hanuman in forty-four-quarters. This is a very short work in which excellent appreciation of Pawanputra Sri Hanuman has been provided. In this, not only is the sentiment of Bajrang Bali, but Shri Ram’s character is also carved in simple expressions. It is said that the recitation of Hanuman Chalisa eliminates the anxiety, the distress disappears. Considering its serious moods rouses commitment with higher learning in the mind.

Emperor Akbar’s troops also sank to stop the panic of monkeys. Then Akbar, following the opinion of a minister, released Tulsidas Ji from prison. It is said that as soon as Tulsidas Ji was relieved from the prison, the monkey disappeared from the whole area.

Would you also like to know about Hanuman Aarti? if yes, please let us in the comments below.

All contents provided on this website are meant for EDUCATIONAL PURPOSE only. We DO NOT support, encourage, or seek to engage in copyright infringement or piracy in any way. Please support the artists by buying the original content from authenticated sources.